**Due to heightened order volume, shipments may be delayed up to 5 business days: An Important Update on Shipments HERE

Demand for gold as a reserve asset strengthened considerably in 2018, rising by 74% compared to 2017, in response to the geopolitical and macro-economic environment. It also broadened. Our flagship training programme for reserve managers, held in conjunction with the National University of Singapore, received a record number of applications from central banks globally keen to learn how gold can help them meet their safety, liquidity and other objectives. Our mid-year central bank survey reported that one-fifth of central banks surveyed intended to increase their gold holdings over the next 12 months, with none planning a decrease.

This was borne out by events, with over 20 central banks purchasing gold in 2018. This included many new buyers or central banks that had been dormant in the gold market for several years. Even some European central banks bought gold, with the national banks of Poland and Hungary both making sizeable purchases. The central banks of Russia, Kazakhstan, and Turkey also remained prolific buyers. The desire to de-dollarise foreign exchange reserves, in response to deteriorating geopolitical relations in some parts of the world, fuelled some purchases. While other central banks bought gold for diversification reasons and, in Hungary’s case, partly as a hedge against structural changes in the international financial system. We expect all three influences to strengthen this year. 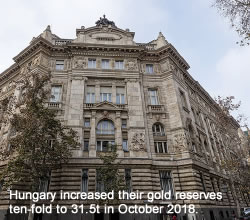 Responding to the imperative of ESG responsibilities

Given the increasing importance placed on demonstrating environmental, social and governance (ESG) credentials across all industries, we established a task force together with members and led by our Vice Chair, Gary Goldberg, to demonstrate and enhance gold’s ESG credentials. Our first report on Gold and climate change was released one year after the recommendations from the Taskforce on Climate-Related Financial Disclosure (TCFD). It focused on building an understanding of the gold industry’s greenhouse gas emissions footprint and demonstrating the efforts already underway to reduce emissions. It also highlighted the gold industry’s role in improving energy efficiency and developing low carbon technologies.

In February’s Union Budget, India’s Finance Minister indicated the government’s commitment to defining comprehensive gold policies that would establish gold as an asset class, together with the creation of a gold exchange. This reflected a profound change in approach. Leading on from this commitment, the government’s think-tank, NITI Aayog, released a gold policy report with 84 recommendations to transform the gold market over the coming years

All orders ship within 3 business days of payment. *Temporarily suspended due to extreme order volume*